Zao Wou-Ki at Musée d’Art Moderne of Paris: When the painting becomes a sound

The exhibition “Zao Wou-Ki – L’espace est Silence”, curated by Fabrice Hergott, is the first large exhibition of Zao Wou-Ki in Paris for the last 15 years. It assembled the large-scale paintings and drawings of the master of the abstract painting, who left a very significant trace in the history of European contemporary art.

Very ancient and omnipresent, the music was the first absolutely abstract artistic expression in the human history. For thousands of years, the music was inspiring creators of figurative painting. However, only modern artists dared for the first time to create an utterly abstract painting, capable of being so emotional and impressive as the music.

This utopical ambition firstly appeared in the early 1910’s with the first successful tentatives of some European artists (Wassily Kandinsky, Robert Delaunay, Kazimir Malevich, František Kupka and others) to create a brand new type of painting, capable of transmitting emotions and feelings with the use of non-figurative forms and colors. The more time passed, the more courageous the painters were in their search for an ideal and pure artistic expression. However, for many of them the music, an ancient art, remained the principal source of inspiration. 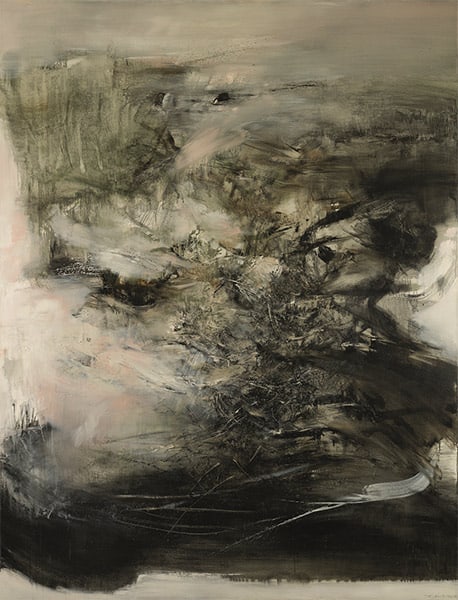 That was the case of Zao Wou-Ki (1920-2013), a Chinese-born artist, living in France since 1948, who is well-known today as one of the most influential abstract painters of the 20th century. Inspired by contemporary music and poetry, he succeeded to create artworks that impact the spectator as the music itself. The flow of colors and forms of his oils on canvas absorbs the viewer, allowing him to feel a rich gamma of emotions as if he was listening to a musical composition. In the same time, his artistic language is complex, with many references and undertones, that is why almost every painting or drawing of the artist is a multi-dimensional artwork, which can be rethought and reconstructed.

The elegant combination of western achievements of abstract painting with eastern calligraphic and picturesque traditions made Zao Wou-Ki an emblematic figure of the international art scene in the age of globalization. Inspired by his favorite western artists, like Monet or Matisse, he always had a specific eastern perception of their art and was capable of transcribing it on canvas or paper.

Zao Wou-Ki arrived in France in 1948. Sometime later he discovered French impressionist and post-impressionist art and also met a poet Henri Michaux and a contemporary composer Edgar Varèse, people, who significantly affected the young artist. That was a time when Zao Wou-Ki adopted a new artistic expression of the abstract painting, even if the term ‘abstract’ seemed to him too radical and inappropriate at the moment. In 1956, remaining under the influence of contemporary music and a new wave of American and French artists, Zao Wou-Ki created “Traversée des appearances” (oil on canvas, 97 x 195 cm), a masterpiece that determined a new, ‘non-figurative’ period in his artistic career. 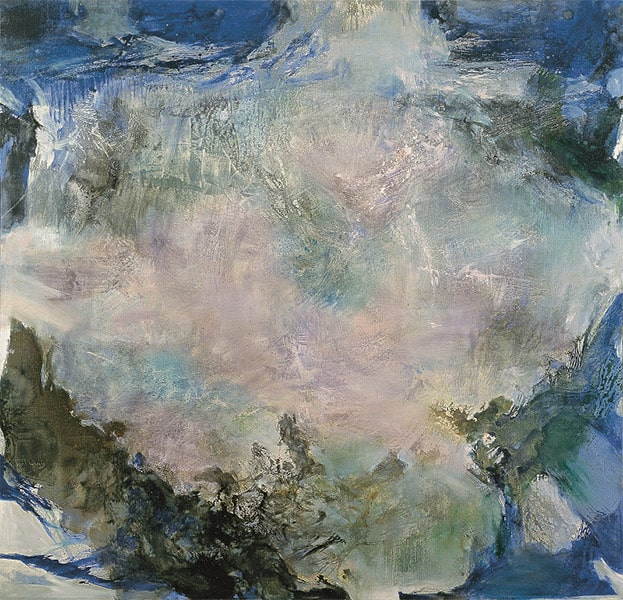 Then, the talented artist started experimenting on a large canvas, developing his iconic style of abstract painting. Fascinated by music, he created in 1964 an artwork named “Hommage à Edgar Varèse – 25.10.64” (oil on canvas, 255 x 345 cm), a large canvas that absorbed the artist’s respect to the composer. This magnificent work illustrates the artist’s capability to depict even the music with its intangible vibrations and rhythm.

Dynamic or calm, colorful or nearly monochrome, rapturous our disturbing, Zao Wou-Ki’s art spoke to everyone. However, after transcending the boundaries of human expression, the artist did not stop and decided to transcend the time. His admiration for the Monet’s “Nymphéas” let him to the creation of “Hommage à Claude Monet, February-June 91” (oil on canvas, triptych, 1991, 194 x 483 cm), a quasi-figurative painting with an unusual combination of cold and warm colors. “Hommage à Matisse I – 02.02.86I” (oil on canvas, 1986, 162 x 130 cm) is a wholly different abstraction, which awakens some nostalgic memories due to monochrome stripes and emblematic palette.

Inspired by contemporary music and poetry, he succeeded to create artworks that impact the spectator as the music itself. The flow of colors and forms of his oils on canvas absorbs the viewer, allowing him to feel a rich gamma of emotions as if he was listening to a musical composition.

However, the most important artistic breakthrough was waiting for him ahead. Zao Wou-Ki newer stopped experimenting, and at the end of his career, he turned to Chinese ink drawings on a large-scale paper. Was it a new step in the evolution of abstract painting or the return to the origins –  the Chinese calligraphy, this new art helped Zao Wou-Ki to achieve an incredible freedom of expression and also to achieve the recognition of the drawing as part of the contemporary art market.

Artworks of the Chinese-born master of abstraction, exposed in the Musée d’Art Moderne de la Ville de Paris, were crucial for the history of art, determining turning points of the artist’s career. He died in 2013, remaining one of the greatest artists of the past century, recognized by experts, collectors and the public.