Beyond the limits: teamLab digital art exhibition in Paris

The human is a being that often opposes himself to nature. Isolating from the latter, he creates his own world, seeking the security and comfort. Throughout history, he was building his own universe, moving away from nature. But with more significant inventions he was making, the more he missed the natural balance and purity. Thus, he was seeking the restoration of his original relation with nature through art. An infinite number of artists of different epochs tried a various media, returning to primitive creation, refusing the technology and progress in search of art that would allow the spectator to feel himself in the harmony with nature. However, it was finally the technology, an opposition to nature, that allowed some artists to achieve this goal. This is the case of teamLab, a Japanese artistic collective that uses exceptional installations, which can be called, without exaggeration, alive.

Their artworks are immense, not framed and fully immersive. Remaining totally figurative, they represent a diversity of forms and figures of nature, of flora and fauna, and, sometimes, of human individuals too, inviting the spectator to join their vivid world and feel a connection between himself and the nature. Destructing the barrier between the artwork and the spectator, this art envelopes the viewer, makes him a part of its universe of forms and colors, and, furthermore, offers him an opportunity to become its co-creator. teamLab artworks are made by more than 450 people, including artists, programmers, engineers, scientists, architects, and animators, who have been operating together since 2001. 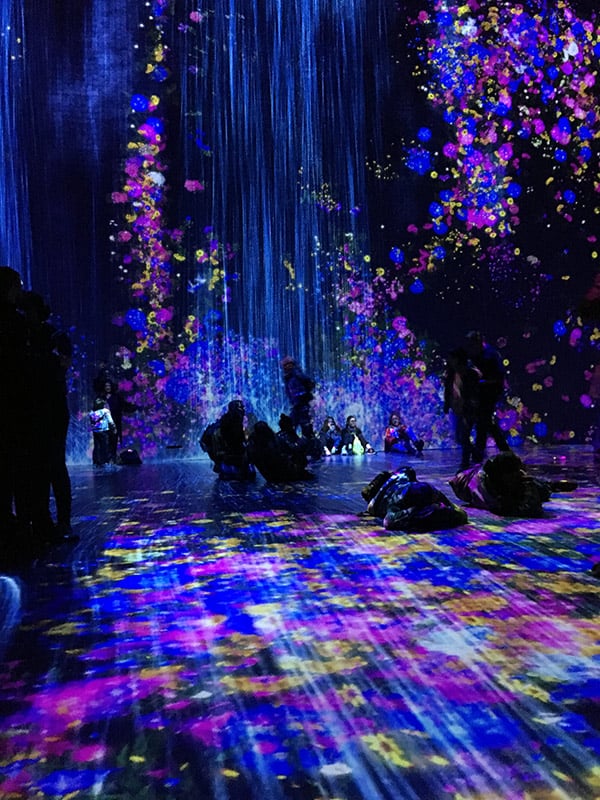 Their principal instrument for the creation is digital technology: their art involves projectors, touch screens, audio speakers, and scanners; and their principal objective is to form a new type of art, open and interactive. teamLab seeks to escape the limits of ‘conventional art’ and to create outstanding installations, that change our understanding and perception of contemporary creation. Being really impressive, their artworks do not shock the spectator, nor are they causing discomfort. On the contrary, they are trying to remain friendly and attractive, despite their scale and dynamism.

The name of the exhibition of teamLab, which opened on the 15th May in La Villette in Paris, is “Au-delà des limites”, which means meaning “Beyond the Limits” — beyond the barriers between the visitor and the artwork, and at the same time, beyond the frontiers of ‘conventional art’. The exhibition assembles in the 2,000 square-meter space the most iconic and new artworks of teamLab, among which you can find an enormous 11 meter-height and 26.5 meter-width interactive waterfall, some installations reproducing the whole saison sycle, or entire digital worlds, created by visitors of the exhibition. As all the artworks exhibited are reacting to the public’s actions, people and art are in dialogue, co-existing in one digital universe. The latter changes significantly because of the public, thereby, “Au-delà des limites” turns into a unique symphony of artworks and people, never the same.

The exhibition meets the public with the works “Graffiti Nature – Mountains and Valleys” (2016) and “Graffiti Flowers Bombing” (2018), a whole ecosystem worlds made by people: they offer to color new animals or flowers on paper and to scan it. The software integrates the digital artwork in the composition, and then the visitor suddenly finds his creation among thousands of flowers, plants, lizards, fish, moving, appearing, vanishing, multiplying across the space. That’s how the visitor discovers from the very beginning that the digital universe, created by teamLab, is playing with him and changes dynamically regarding his actions. Whether he is a wind for flowers or a living being for spirits, the human can always become a co-creator or a destroyer of every artwork, seeking for harmony or chaos.

But sometimes, playing with this astounding universe, the spectator does not notice that he himself becomes a part of an artwork. If you stand apart from the crowd, you can see how people in the light of projectors become an organic piece of several artworks. For an instance, the hall, where the installation “Impermanent Life: People Create Space and Time, at the Confluence of their Spacetime New Space and Time is Born” (2018) is shown, allows the visitor to transform the surface of walls around him and to create his own worlds, that are borning, burgeoning and dying. But it also transforms the creator himself into a part of the artwork, making him to dissolve against the background of the walls. That’s how a human, an omnipresent forceful being, is shown as an indispensable part of this universe he changes and considers to rule.

The exhibition “Au-delà des limites” will be opened in the Grande Halle de La Villette in Paris until the 9th September 2018.