by ArtPremium | We Believe In... 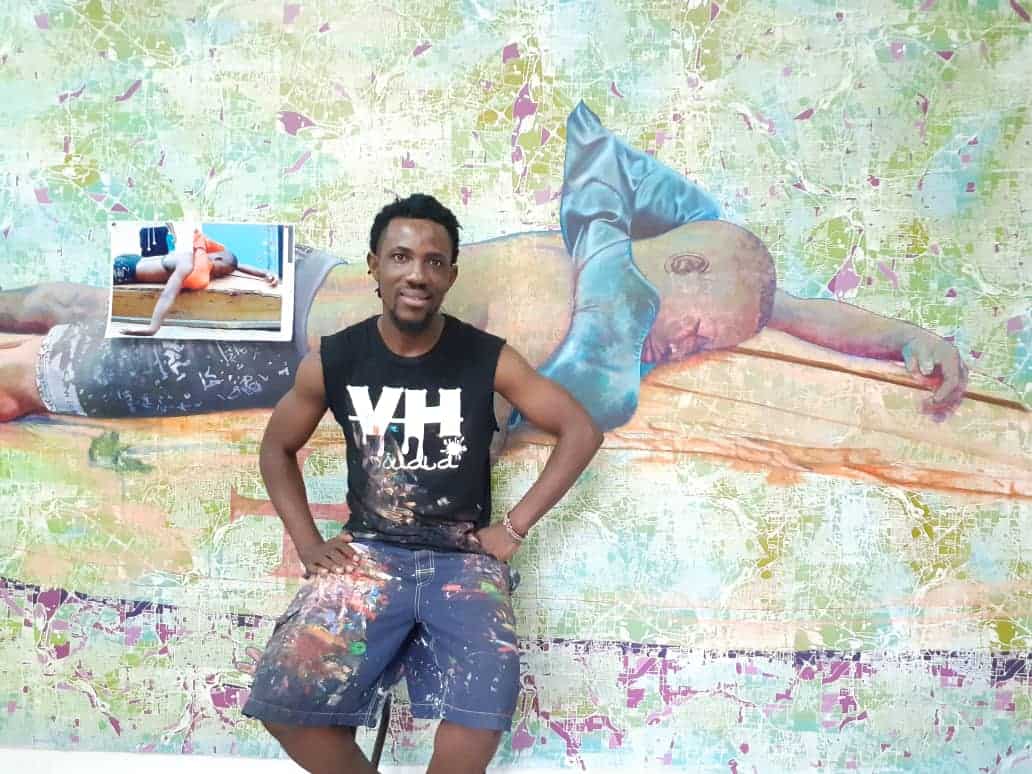 There are many snippets which can be spotted. The faces hold a sad and tired presence. Sometimes, the maps become more realistic. Familiar territories emerge from the infinite roads that intertwine randomly. We recognise Europe and the Middle East. The work is political and openly calls for justice. Jean David Nkot denounces the borders and the marginalisation of the poor. He points out this desire to separate the world at all costs and to block the way to those tarnishing a political ideal.

The canvas Lampedusa marks a turning point. The colour imposes itself. The face embodies all the anonymous persons who have drowned in the Mediterranean sea, unable to be identified. Here, far from a miserable discourse, the character frees himself from the map and takes power. He becomes the voice of these people who leave their country for a better life. These persons are those neglected by government, made invisible and left to their own devices, at the risk of their lives. Men, women, children. They hope to reach Lampedusa – the Italian island lost in the middle

of the Mediterranean Sea – the first European territory on the maritime route of these migrants who leave the African coasts. Their first step towards what they imagine to be a better life. Under the brushes of Jean David Nkot, their proud gaze pierces the viewer and recalls their history.
While Lampedusa testifies from a change in his work: the central character emerges from the map that imprisoned him until then – in the rest of the work of Jean David Nkot, the portraits free themselves. On the canvas, the map recedes into the background. It remains a central element of the work and actively participates in the narrative. The logical and rational mind is lost in this cluster of destinations. In #Au-delàduregard@yahoo.fr, Calais in France is next to Lecce in Italy and Ceuta in Spain. If the geography seems random, it is above all personal. Jean David Nkot deconstructs the world as we know it. He remodels the territories to compose mental cartographies. Sometimes, companies or districts replace the names of the cities. These red or blue dots, meticulously added with posca, always retrace the history of the person they surround. 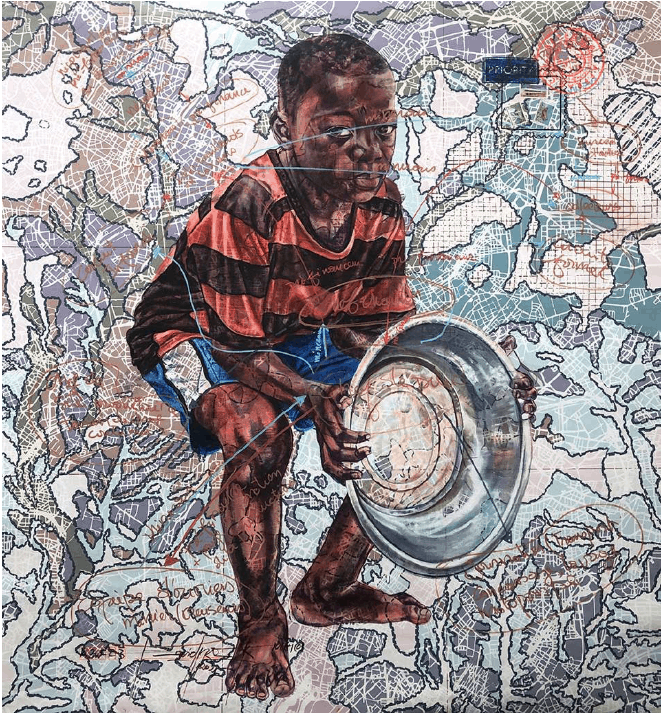 The colors that had been emerging timidly until then are now shimmering. Soon, the cartography serves the story of the person it supports. Jean David Nkot gives a voice to those who are not seen. Neighbors, friends, as well as people who met in the street become his models. Sharing a drink, they speak and dream. If the artist first immortalizes the moment on photographic film, he then transcribes it on the canvas. He gives a voice to those who are not seen. The imaginary journey that comes to life under his brushes evokes their dreams and their disappointments. He analyses how individuals surpass themselves to exist as people. How do bodies exist in an environment that is not favorable to them? The journey is here a pretext to illustrate the human condition during this movement. How are people considered and how do they evolve between their point of departure and their point of arrival?

To facilitate this, he integrates the concept of the ‘grey zone’ developed by Primo Levi in his book The Drowned and the Saved (1986). If for Primo Levi the grey zone was above all the space between the executioner and the victim, Jean David Nkot considers it like the time between the departure and the arrival within a person’s trip. Under his brushes, the central character finds himself in the middle of this grey area, between his departure and his arrival, a symbol of the dreams he feeds during his journey.
Jean David Nkot deconstructs these dreams by emphasising their limits, starting from his series “Les Indésirables”, created in 2018 during the residency “Moving Frontiers” in Paris-Cergy. From this moment, throughout “Juju Connexion” and “The Shadows of Space”, the map takes over. If at first, he still realises a realistic portrait, the maze of geometric streets quickly buries the bodies lost within. He, thus, takes us to the other side of the dream and plunges us into the reality of immigration. The series “Les indésirables” sets the tone. He anonymises these ‘undesirables’ by only keeping their silhouette. The territory wins. This welcoming land, the promise of better days, makes them suffocate until they forget who they are. Jean David Nkot extends this reflection in « The Shadows of Space. » He shows how these ‘undesirables’ are turned into shadows. When they get rid of their identity papers to avoid being sent back to their country, they suffer from a true loss of identity, both linguistically and culturally, as well as socially and economically. 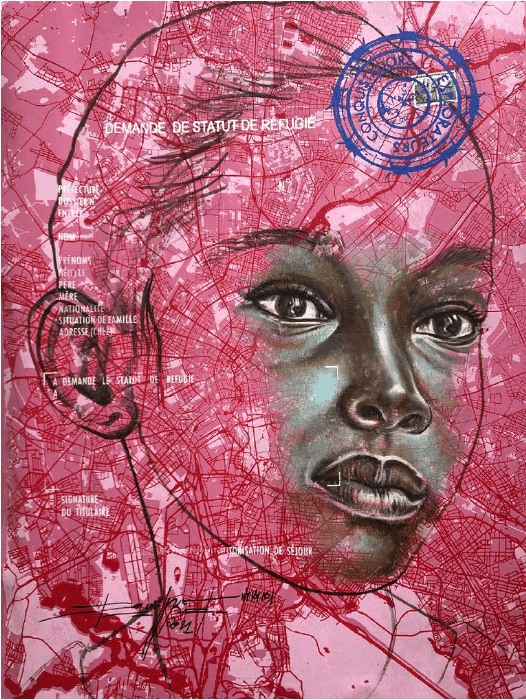 Visually, the artist erases these faces by making them disappear behind the density of the city. Soon, the character gets lost in this chaotic urban geometry. While the cartography was until then very personal, filled with anecdotes, it now becomes a generalised and repeated motif, applicable to all. These personal stories become a story among many others. As a way of denouncing the fatalism and inactivity of governments regarding the migratory situation. The process finally marks the victory of the territory over the body that forgets itself in the hope of being integrated. But how can we be integrated when no one wants us?
Finally, from these abstract figures, he only keeps the silk-screened maps. The bodies take over. They rise to the surface and come back to the front of the canvas. However, the map, in transparency, makes their outlines look phantasmagorical. Here, territories and bodies merge in what the artist calls a ‘map molecule’ – like cells that interact and interlock. Jean David Nkot engages a reflection on the representation of the body and its place in society. The body is abused and sacrificed. In these crypto-portraits exhibited at the Doual’art space in February 2021, on the occasion of his personal exhibition “Body and Space”, he stages members of his entourage to pay tribute to the victims of armed conflicts in northern Cameroon, as well as to those who left their country in hand-made boats.

This fusion between two styles leads to a new figuration that even materialises physically in the installation Trading Space. His works take on another dimension. They are adorned with data that the artist analyses and questions. To this end, his work focuses on mining in Congo. Trading Space draws a parallel between the richness of Kinshasa’s soil and the various historical shocks that have torn the country apart. By confronting archival images of the first mining complexes with current images of the same sites, Jean David Nkot questions this heritage and studies the repercussions it has today. He associates the production sites, the faces of those who exploited them and those who exploit them, by painting their portraits on shovels. Often seen in his work, he exhibits to the world the faces of these workers in the shadows. By using real statistics, which he displays and comments on directly on the canvas, he questions the public financials and unveils the hidden underlying reality. He is particularly interested in artisanal mining, which represents more than half of all mining in Congo. Above all, he points out the consequences of this model in which companies buy more and more raw materials at the lowest cost, despite the overexploitation of the subsoil, as well as the humans. 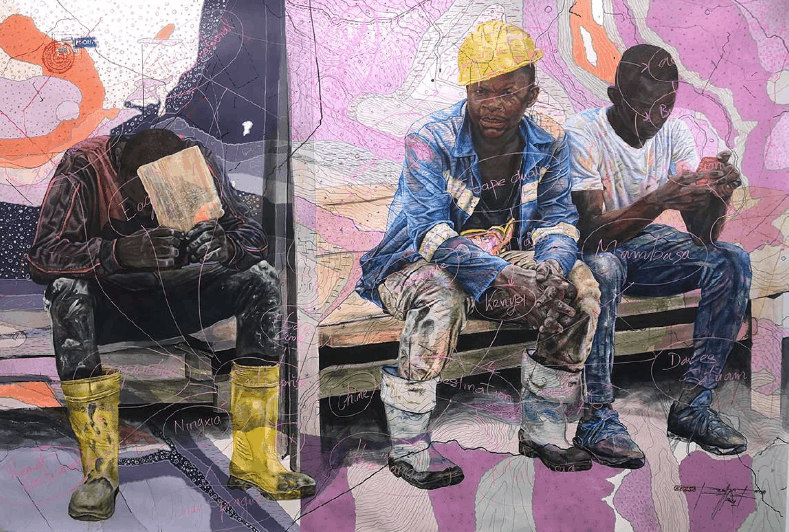 Jean David Nkot’s interest in mining already materialised in his painting starting from the series “Les creuseurs de sous-sol”, created during the summer of 2020. He focussed on the men who work to extract the ores demanded by international companies to be integrated into our smartphones and other electronic equipment.

In his two paintings #creuseur/chantier45@outlook.com and #creuseur/chantier14@hotmail.com, Jean David Nkot leaves behind any dramatic dimension to focus on those who work in the shadows, rather than on the matter itself. He pushes us to question the way items we use daily are manufactured. Concerning the ore – cassiterite – the men who extract it are invisible and ignored by most of society. The cartography unveils, for once, the reality of mining. The names of armed groups replace those of towns, while the names of minerals undulate and occupy the land. 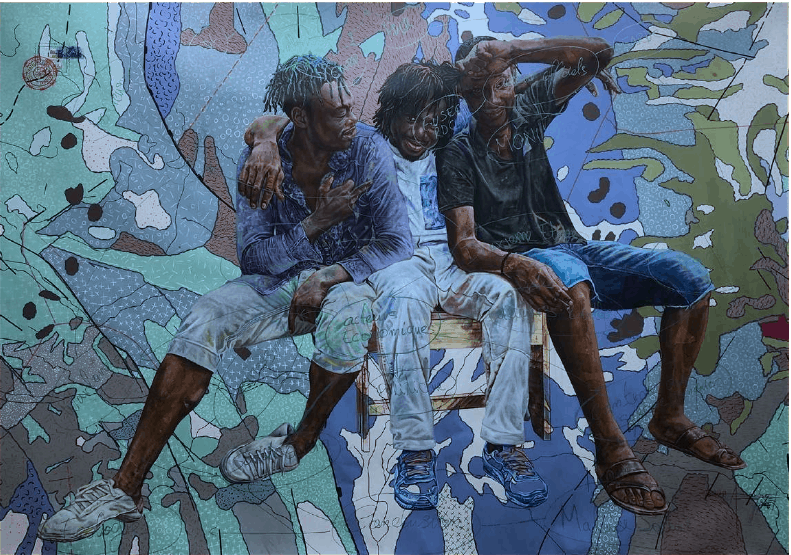 In the series “Jungle Story”, continuing « Les creasers de sous-sol », the causes of migration replace the names of towns. The map merges with the skin of the characters. Double transparency tints now the work of Jean David Nkot: the transparency of both bodies and data. Each canvas conveys a message to the world. Each message is a source of information. Each piece of information is detailed. From one canvas to the other, Nkot specifies the names of the armed operations in Africa, of the ore extraction companies, of the ores themselves, or of the armed groups. His method is precise. A network of lines associates the pieces of information together. Ready to be analyzed, they live alongside the faces of the children, collateral victims of a phenomenon where political and economic issues are at stake. If his canvases remind of data analytics and investigation methods, Jean David Nkot is particularly interested in the work of American artist Mark Lombardi. Starting from 1994, the man who wanted “to make the invisible, visible”, started to create what he called ‘narrative structures.’ These abstract diagrams aimed to explain financial trade movements. If the object and form of the analysis is different in the work of Nkot, the Cameroonian artist also conceives his canvases like treasures of information. He feeds his art from his meetings and readings. He builds hence, the archives of his time, in parallel with his body of work. 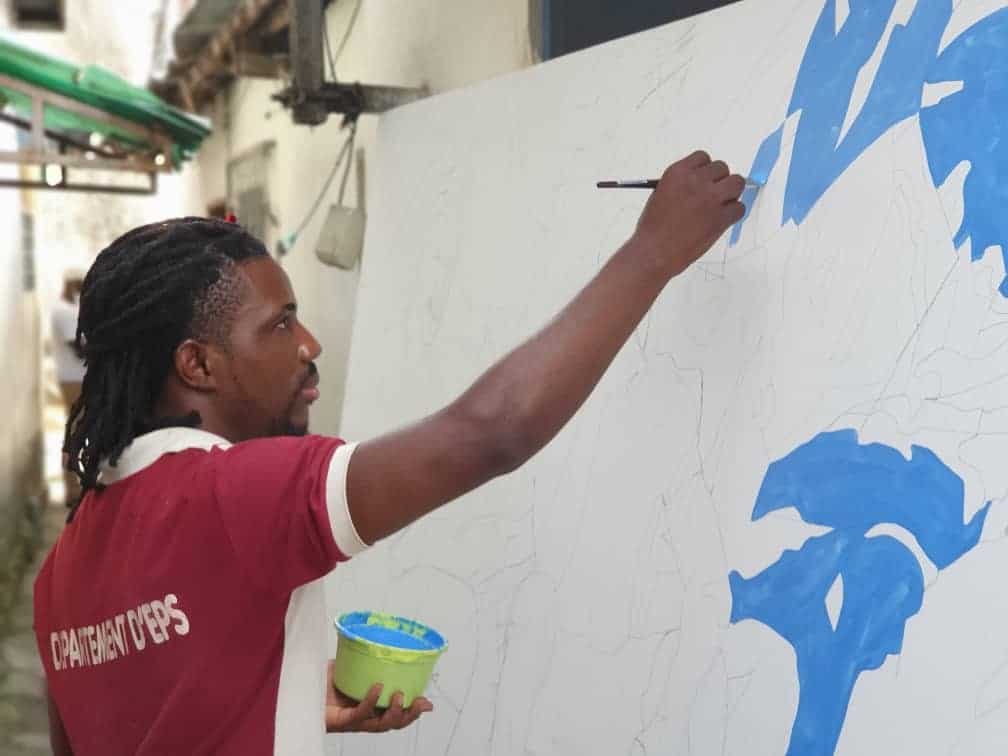 Whilst Jean David Nkot focussed on the sorrow of his characters, it is time for them to be redeemed. He now frees his portraits from the weight of their history and emphasises their struggle, rather than their pain. He is interested in the moments of joy and captures the smiles behind the suffering. He calls for neither pity nor compassion and praises the resilience and strength of these anonymous people. He reminds us that every day is a pain worth living.